what makes a great tenor? 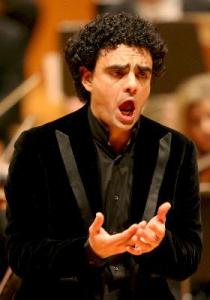 No matter how much you know about opera or about tenors for that matter, you’ll love this seven-part series “What Makes a Great Tenor?” produced by the BBC and hosted by tenor legend Rolando Villazón.

Villazón is an intelligent, gracious host. He is generous with his praise of other world-renowned tenors of his generation–Juan Diego Flórez, Plácido Domingo, Jonas Kauffman. And shares his instrument on cue–a real pro!

He is a most charming teacher and guide. And the perfect choice to lead us through this series. When he says, “They have all [tenors] received deafening applause,” that’s an experience he himself can claim, rightly so.  Later when he says, “Being a tenor takes dedication and a lot of hard work”  observations on his profession like this and others are delievered with credence and conviction.

This is a truly delightful series that enlightens and entertains. You’ll hear Roberto Alagna speaking in French about how significant it was that the tenor voice became a virile-sounding vocal part in the 1830s, which has certainly been a large measure of his superstar appeal and countless others.

There are wonderful contemporary and historic snippets of the great ones singing the great arias. Even interviews with the divas of today regarding the signficance and the challenges of the tenor role.

Here is the first part (1/7) of “What Makes A Great Tenor?”  All seven parts are available on YouTube. It is not to be missed. Do let me know what you think of it.

did you know the tenor was the ‘holding’ voice?

As a word person, I’m forever curious about the origin of words. (I really should have taken Latin instead of German classes in high school. Latin would have been a stronger springboard to support my lifelong interest in etymology.)

Since we are featuring tenors all month on Operatoonity, I simply had to find out where the word came from.

Did you know “tenor” derives from the Latin word tenere, which means “to hold”? Like so many other words now in use, it came to mean something quite different over the centuries.

Apparently, between about 1250 and 1500, during the time of medieval polyphony (music with two or more independent lines), the tenor was the structurally fundamental (or holding) voice–vocal or instrumental. All other voices were normally calculated in relation to the tenor.

Until the late 15th century, the tenor was usually the lowest voice, in order to provide a harmonic foundation. It was also in the 15th century that “tenor” came to signify the male voice that sang such parts. For earlier repertoire, a line marked ‘tenor’ indicated the part’s role and not the required voice type. Indeed, even as late as the eighteenth century, partbooks for ‘tenor’ might contain parts for a range of voice types.

So when did the word tenor as we know it come to mean the highest male vocal part or one who sings that part?

According to Yale Press’s “The Prehistory of the Voice,” the notion of the modern tenor voice “accelerated rapidly from the eighteenth century onward” until it became the voice part we know it as today–the voice of princes and dukes, of lovers and their beloved, of martyrs and heroes.

Comments Off on did you know the tenor was the ‘holding’ voice?

Today, June 17, marks the 129th anniversary of the birth of Russian-born composer Igor Stravinsky, who is widely regarded in the operasphere for his revolutionary compositions despite harboring a lack of fondness for opera.

At the tender age of 31, Stravinsky said on record,  “I dislike opera.” He went on to explain that music can be “married to gesture or to words” but not both without committing “bigamy.”

In spite of his dislike of opera, he wrote several operatic hybrids that fall somewhere between opera and ballet (The Nightengale, Mavra, Oedipus Rex, Renard, Perspephone, The Flood). But he composed only one pure opera in three acts, The Rake’s Progress, inspired by a series of prints by artist William Hogarth. Hogarth’s eight paintings, created in 1735,  show the decline and fall of Tom Rakewell, a spendthrift heir of a rich merchant. Rakewell comes to London and squanders all his money on decadent living including prostitution and gambling, is imprisoned, and ultimately loses his senses and is committed to Bedlam.

The Rake’s Progress that has been labeled a difficult opera because of its complex, multi-tiered score. Its quirky music borrows from classic tonal harmonies of  Mozart and Monteverdi. Of course, it wouldn’t be Stravinsky if it didn’t interject dissonance that catches you by surprise and those trademark off-rhythms.

A quick search on Bachtrack shows numerous stagings of Stravinksy’s The Nightengale (Le Rossignol)  in the coming months. No major house is currently mounting Rake’s though Glyndebourne Opera Festival did a critically acclaimed version last summer.

The Rake’s Progress, with a libretto by W. H. Auden, premiered in Venice in 1951. It is considered the defining work of Stravinsky’s neo-classic period.  The  Metropolitan Opera first presented it in 1953.  In its first season in 1957, Sante Fe Opera did the work with Stravinsky in attendance, marking the beginning of his long association with the company, including a 1962 Stravinsky Festival the Opera House staged in honor of the composer’s 80th birthday.

Here’s a clip from director Robert Lepage‘s spirited restaging of The Rake’s Progress set in decadent Las Vegas rather than 18th century London: