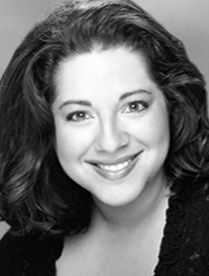 These are just some of the glowing comments reviewers have made about award-winning lyric coloratura soprano Michelle Trovato. Michelle received a bachelors of music in voice from the North Carolina School of the Arts School of Music in 2003. She trained with the New York Opera Studio, 2004-2005, and in 2008. She was a member of the Opera Colorado Outreach Ensemble in 2008, and performed with the Seattle Opera Young Artist Program during the 2008-2009 season.

Welcome to “Operatoonity,” Michelle! So glad to have you. 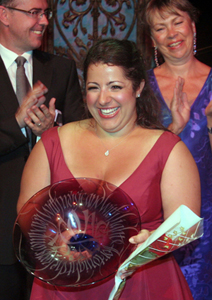 Where did you grow up, what was your home life like, and how did it affect your life choices?
I grew up initially on Long Island, New York, which was very important because the arts are so active out there, and of course because of the close vicinity to NYC.  We were also bused into the city from school on a regular basis to see Broadway musicals, practice sessions with the NY Philharmonic….and operas!  I saw Aida at the Met when I was 13-years-old and cried during the tomb scene.  I had no idea what the opera was about, never saw a program, and there weren’t supertitles yet, so I had no idea what I was seeing or hearing! But I found it very moving, I just didn’t know why at the time.  And of course we were in the very last row, so I couldn’t believe the POWER of their voices!  I never thought that I could do that; it never even occurred to me.  But I was always singing and performing in musicals and plays both in school and in the community on Long Island.

The big change came when I was 15-years-old, and my family relocated to Virginia, where I began immediately studying with a retired opera diva named Basel Landia Wowk.  We started out singing every legit soprano musical theatre song you can think of, and slowly she began introducing opera arias into my repertoire.  She would say: “You’re Italian, right?  Just TRY it!!” And she gave me books to read (most notably Bubbles, Beverly Sills’ autobiography), recordings to listen to and videos to watch.  The next thing I knew, I was hooked!

When did you make the decision to pursue classical vocal performance as a career?
I pretty much decided to pursue singing as a career at around 18-years-old. 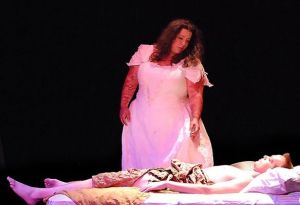 How would you describe your voice? What repertoire do you sing best?

I have that warm lyric sound with the upper extension and facility that works especially well in the bel canto repertoire.  I think this also helps in singing new music, which often calls for a large range and agility. Objectively speaking, I suppose that I sing Italian repertoire the best, especially works by Donizetti, Bellini, some Verdi, and Puccini (the lyric roles), but it is a big goal of mine to help promote new music.

Favorite composer? Favorite opera? Favorite role?
I can’t even pick a favorite color!  I do have a dream of singing all the Donizetti Queens….I’ve already performed Anna Bolena in concert and really look forward to singing the others!  I would also love to play Baby Doe.  There is something about that role that really speaks to me…perhaps because she was an extraordinarily strong woman, just like the Queens.

Do you have any opera role models?
Reading Sills’ autobiographies really gave me courage as a young singer, as did reading about Callas’ young life.  These women, coming from a poor background, who struggled for every bit of success that they achieved….amazing.  I would say that I identify with Sills’ brand of “good humor in the face of adversity” the best, but both women have inspired me a great deal.  My current voice teacher, Carol Kirkpatrick, is also a huge role model for me.  Not only as an artist, but as a human being, she is always striving to better herself. I admire her greatly for that and for many other reasons.

What was the single, most meaningful experience you’ve had as a performer or student of the classical arts?
Singing the Faure Requiem on the 1st Anniversary of 9/11 is something I will never forget.  There were thousands of people crammed into the sanctuary of a beautiful church, and even the basement, where they were piping in the concert, was full.  Singing the “Pie Jesu,” I had to remember that my job was to give comfort and to sing with joy, as we always should, even in the darkest times.  I can only imagine what 9/11/11 is going to be like, 10 years later.  I have hope that the event will be about honoring those who have died and bringing that same joy and comfort to those who are with us today. 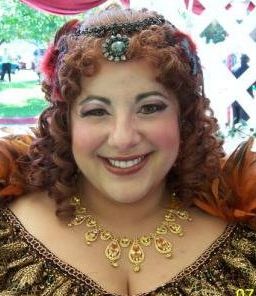 What would you like to be doing in five years? Ten years?
I would like to become more financially stable over the next 5 to 10 years by singing in larger and larger companies both nationally and internationally, but mostly I just want to keep SINGING.  Opera, of course, but I have already performed one recital program this year and am looking forward to a 2nd one in May.  There is a huge wealth of concert and recital repertoire out there and I have ideas for more programs than I can count!

Do I have a dream to sing at the Met?  Yes, it would be wonderful.  But my goals are not focused that way.  I LOVE what I do and I just want to keep doing it and make enough money to live- not an easy task.  The way I view it, I want to continue to strive for artistic and vocal excellence and work with like-minded artists.  And pay my bills.  Beyond that, I am content.  (Even if I never make it to the “big house”!)

When did you begin using social media to advance your platform and how has it impacted your career or visibility?
I developed a website back in 2007 after a big competition win.  (I finally had something to put online!)  Also, I was booked in YAPs for almost the following 2 years, so it was the perfect time to get my information on the web.  I also joined Facebook in 2007 to keep in touch with people I met at the competition (they couldn’t believe I’d never heard of it!) but I am quite new to Twitter.  I only joined Twitter a few months ago.  I am enjoying it so far, and am particularly glad to have made the connection with “Operatoonity!!”  Next is Youtube.  I have to learn how to edit video and get it up there; I am super technically unsavvy, sadly.  I WILL have more video online in the next few months, this is my Scarlett O’Hara “As God is my witness” declaration!

As to how it’s impacted my career, of course it’s a huge help to be able to refer people to my website for further information about me and for sound clips, as well as production photos. I have definitely made some major connections on Facebook, and I have both gotten and helped others get work because I was able to connect with them there.  I have been contacted after performances from quite a few audience members who found me on Facebook (perhaps I should start a Fan page as well?) and have received numerous engagements from connecting with people online.  It’s amazing- you just never know.

What is something most people don’t know about you, something not on your resume?
I’m on a pop album called “Incomplete Denial,” singing in the background on one track.  They paid me to go into the recording studio for an hour and sing the same phrase over and over.  I found the job on Craigslist! 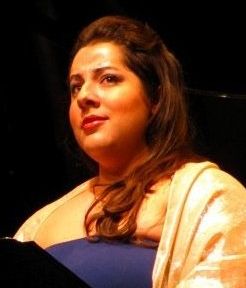 Where can we expect to see/hear you in 2011?
I have my 2nd recital of the year coming up, a program inspired by “Angels and Demons” at the Hudson Opera House in upstate New York on May 14th through Diamond Opera Theater.  This summer, I will be a member of the Caramoor Festival’s Bel Canto Young Artists program, the only program in the States (that I know of) that is focused on the bel canto repertoire, and then attend the International Vocal Arts Institute (IVAI) in Montreal.  And I’m fortunate that there are other engagements beyond that, which I can’t announce just yet.

You can follow Michelle on Twitter @michelletrovato or alternately friend her on Facebook  where she has posted some wonderful production photos. For more about her performances and for some wonderful audio clips, visit her website.

2 responses to “get to know Michelle Trovato, lyric coloratura”